Save the Artistic Heritage presents the DAW® (limited digital edition) of the “Portrait of a Musician” by Leonardo da Vinci in the Permanent Collection of Veneranda Biblioteca Ambrosiana, Milan, replacing the original currently on loan at the exhibition “Leonardo da Vinci in Musée du Louvre” in Paris from 24 October 2019 to 24 February 2020.

The operation is part of a wider framework for the enhancement of the Collection of Veneranda Biblioteca Ambrosiana, following the signed agreement between the Milanese institution and the startup Cinello.

Portrait of a Musician (circa 1485) is Leonardo’s only portrait on a wooden panel in Milan, and the only male portrait created by the artist for a private client in the Sforza court. The work is also known as the Portrait of a Doctor or Portrait of Giovan Galeazzo Visconti, and until the nineteenth century it was mistakenly considered a Portrait of Ludovico Il Moro.

The discovery of the sheet music finally identified him as a court musician: a precious example of Leonardo’s pictorial phase when he produced, among other things, absolute masterpieces such as the Virgin of the Rocks and the Last Supper.

Currently on loan, the work is replaced for the first time ever (until 24 February 2020) by a DAW® – Digital ArtWork, a digital edition on a monitor, produced in a limited series, numbered and certified, in 1:1 scale and in all respects faithful to the original one, created by Cinello in agreement with the Monumental Complex of Pilotta, using an innovative patented technology. 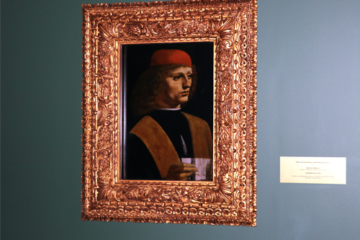